For World Poetry Day we have been reciting some poems... 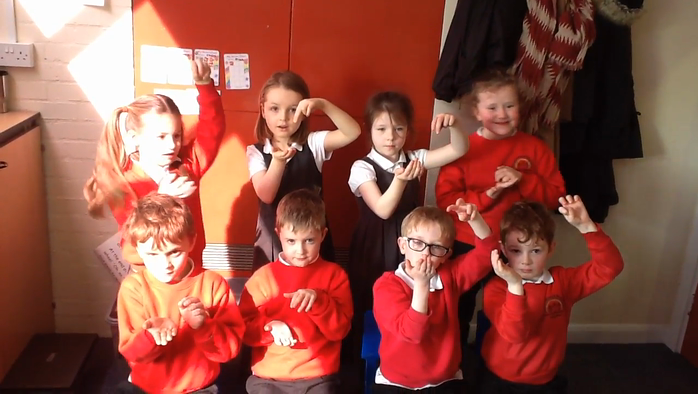 THE LION AND ALBERT

There’s a famous seaside place called Blackpool,
That’s noted for fresh air and fun,
And Mr and Mrs Ramsbottom
Went there with young Albert, their son.

A grand little lad was young Albert,
All dressed in his best; quite a swell
With a stick with an ‘orse’s ‘ead ‘andle,
The finest that Woolworth’s could sell.

They didn’t think much to the Ocean:
The waves, they was fiddlin’ and small,
There was no wrecks and nobody drownded,
Fact, nothing to laugh at at all.

So, seeking for further amusement,
they paid and went into the Zoo,
Where they’d Lions and Tigers and Camels,
And old ale and sandwiches too.

There were one great big Lion called Wallace;
His nose were all covered with scars-
He lay in a somnolent posture,
With the side of his face on the bars.

Now Albert had heard about Lions,
How they was ferocious and wild-
To see Wallace lying so peaceful,
Well, it didn’t seem right to the child.

So straightway the brave little feller,
Not showing a morsel of fear,
Took his stick with it’s’orse’s ‘ead ‘andle
...And pushed it in Wallace’s ear.

You could see that the Liion didn’t like it,
For giving a kind of a roll,
He pulled Albert inside the cage with ‘im,
And swallowed the little lad ‘ole.

Then Pa, who had seen the occurence,
And didn’t know what to do next,
Said “Mother! Yon Lion’s ‘et Albert”,
And Mother said, ‘Well I am vexed!”

Then Mr and Mrs Ramsbottom-
Quite rightly, when all’s said and done-
Complained to the Animal Keeper,
That the Lion had eaten their son.

The keeper was quite nice about it;
He said “What a nasty mishap.
Are you sure that it’s your boy he’s eaten?”
Pa said “Am I sure? There’s his cap!”

The manager had to be sent for.
He came and he said “What’s to do?”
Pa said “Yon Lion’s ‘et Albert,
And ‘im in his Sunday clothes, too.”

The Mother said, “Right’s right, young feller;
I think it’s a shame and a sin,
For a lion to go and eat Albert,
And after we’ve paid to come in.”

The manager wanted no trouble,
He took out his purse right away,
Saying “How much to settle the matter?”
And Pa said “What do you usually pay?”

But Mother had turned a bit awkward
When she thought where her Albert had gone.
She said “No! someone’s got to be summonsed”-
So that was decided upon.

Then off they went to the P’lice Station,
In front of the Magistrate chap;
They told ‘im what happened to Albert,
And proved it by showing his cap.

The Magistrate gave his opinion
That no one was really to blame
And he said that he hoped the Ramsbottoms
Would have further sons to their name.

At that Mother got proper blazing,
“And thank you, sir, kindly,” said she.
“What waste all our lives raising children
To feed ruddy Lions? Not me!”

Take a look at the website links below for some poetry:

Poem of the Week

Unfortunately not the ones with chocolate chips.

Some cookies are necessary in order to make this website function correctly. These are set by default and whilst you can block or delete them by changing your browser settings, some functionality such as being able to log in to the website will not work if you do this. The necessary cookies set on this website are as follows:

Cookies that are not necessary to make the website work, but which enable additional functionality, can also be set. By default these cookies are disabled, but you can choose to enable them below: